The excitement return to their eyes as Miracle began rubbing up against my leg. She looked fatter now, healthy but tired. As  I allowed her in and began getting her water and food I was thrilled to see her but she had more of a surprise for us. As she laid down on the floor in my bedroom I began to notice little  details about her… Her and her large belly among other areas that were more pronounced than before. It didn’t take long as I began to rub her belly and feel babies moving I realized “here we go again”.

As a day went back she became more attached to my side, following my wobbling self around the house. Later in the evening she laid down in the pile of dirty laundry and labor began. I as a mother felt bad, the last time we weren’t there she was all alone while giving birth to five kittens. I laid down and began to rub her stomach between each contraction that she was screeching and breathing through. I saw the pain in her eyes and I couldn’t leave her side. Mind you I moved her to towels in an area that she would feel more comfortable from the children.

Slowly the labor progressed and we began to meet each. First the orange (Cutie Pie as Isabella calls here). Then another ten to fifteen minutes after another black and white… It took over an hour for all FIVE kittens to be born. Black and White (3), as well as ALL BLACK (1) and the oldest orange and white (1). I was there for it all … ALL THE GROSS MOMENTS AS WELL… Yuckkkkkk! But the excitement as they were born was as if I were having another baby. My baby fever has been lifted a bit now. Checking on five kittens throughout the night, making sure they are warm and being fed by their mother (Miracle). 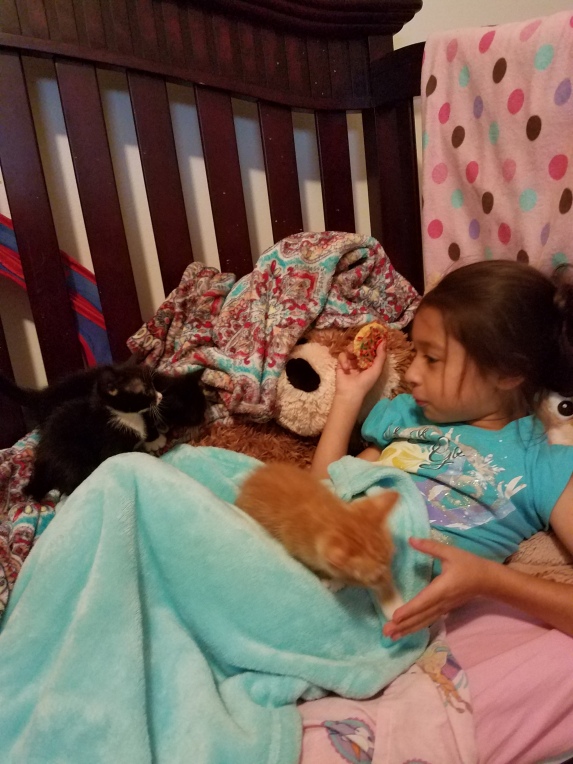 We were blessed with another set of kittens that soon we will be finding homes for. But one will stay with us… They are now a month and a half old, running around playing; jumping on their mothers tail and climbing up the sofas and beds. Healthy and happy these kittens will soon needs names. To think all of these kittens wouldn’t be here if I didn’t find Miracle in the road all that time ago.