It was coursing through my veins like an unstoppable movement and that’s just what I planned to do was be unstoppable! Greeted at the front of I-Drive Nascar my nerves were uneasy; the feeling of excitement but nervousness all at once. The young lady was very delightful and introduced us to the manager. They wouldn’t know it but this would be the first time without children clinging to our legs in months if not a year or more. I was then given a goodie bag of a blue I-Drive Nascar mug, pens, brochures and the lovely tickets for my readers (we’ll get to that soon!) my heart began to race. Entering the doors was as if we were stepping into a thrill seeker and gamers dream. We began putting our information in the computer and taking our photos (which just like my license I added 10lbs haha) for our safety. The accommodating manager then gave us a bit of information about the eight minute races we would be entering as well as the paper tickets informing us of each race we would be entered in. 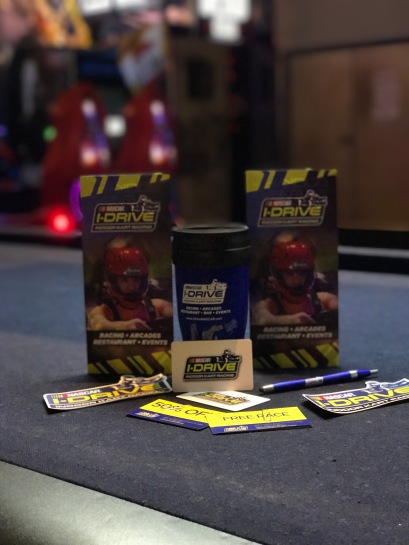 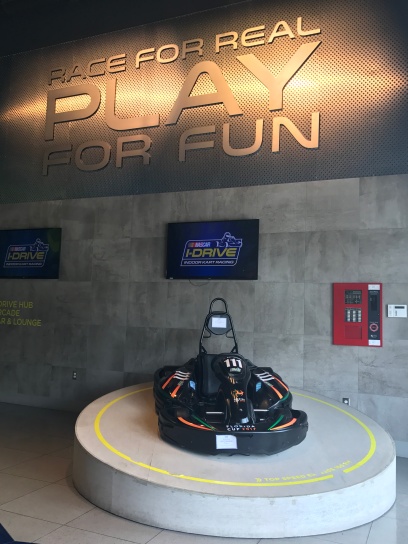 We were off to check the place out as we awaited race number twenty. Walking through an arcade, bowling and pool table area that also had chairs along side the window to watch the racers, my jaw couldn’t help but drop. I didn’t expect just a large variety of activities to participate in during our wait for the races. But to be honest I wasn’t up for doing anything but getting into the go-cart and kicking some… Butt. As race number eighteen began we found our way to the bar and snack area of the building. With windows all around to see the track and racers there was never a dull moment. We sat ourselves at a high-top near the window and watched patiently awaiting our opportunity to see just how fast we could go. Ordering some loaded fries we believed we would have time to sit and watch while munching out; we were mistaken. Before the fries were done our race was being called and we rushed to the “Racers Only” locker room.

They had plenty of space to securely put my goodie bag, phones, wallets and keys with locks! That impressed me knowing that I wouldn’t have to worry about my belongings while racing. To be honest I think once I would sit down in the go-cart I would most likely forget I even brought any items in with me; the excitement was building in me. A young man, Alex then began to give us helmets and black “hair net” as I would call it. He kindly stated the rules for each flag they raised, while I couldn’t help but be the sarcastic funny girl that I am while nervous. The racers then proceeded to exit the track, their faces lit up with adrenaline coursing through them; some awaiting to be in the next race again and others exiting to tell their families and friends how much fun it was!

They called off numbers putting us in order setting my fears of being the first in line to an all time high! What if I couldn’t get my go-cart to move? What if they all laughed at me? These are fears I always worry about when doing something new! I know I’m a bit strange but my insecurities usually try to get the best of me. Finally as we stood in line Alex called off the racers names before we entered our go-carts; I didn’t know I’d have such luck to be in go-cart number 7! My lucky number so what could go wrong during this race? Unplugging each go-cart and checking our safety belts it was about to be on. The young gentleman that unplugged and started each go-cart () also was kind enough to ask if I was alright and if I needed to move the seat closer. My five foot three shortness was extremely noticeable I suppose but I am very grateful, it could have been a disaster with me unable to fully push the pedals down. Each go-cart slowly making its way out of the pits until the final one is when it hit me. The gush of wind on my face and speed I was in heaven! Speeding down the track and drifting around the corners was a new experience… Other than those few times in my vehicle that we won’t get into haha.

I wasn’t going as fast as the others, could have been the corners I kept slightly bumping or maybe the crash I may have caused with about three or four other drives. My apologies racers, I believe I turned as red as a cherry from embarrassment that I needed the young gentlemen stationed in the middle of the track to push my gocart back and turn it a bit to get me going again. Mind you during the time the other racers involved in the wreck were already off and coming back around to get me! The eight minute race felt like a lifetime… Confused on the exiting back to the pits at the end I just followed other racers in. Yes Alex I forgot all the instructions you gave us during the rush of excitement, and I’m sure you already knew that was coming haha. 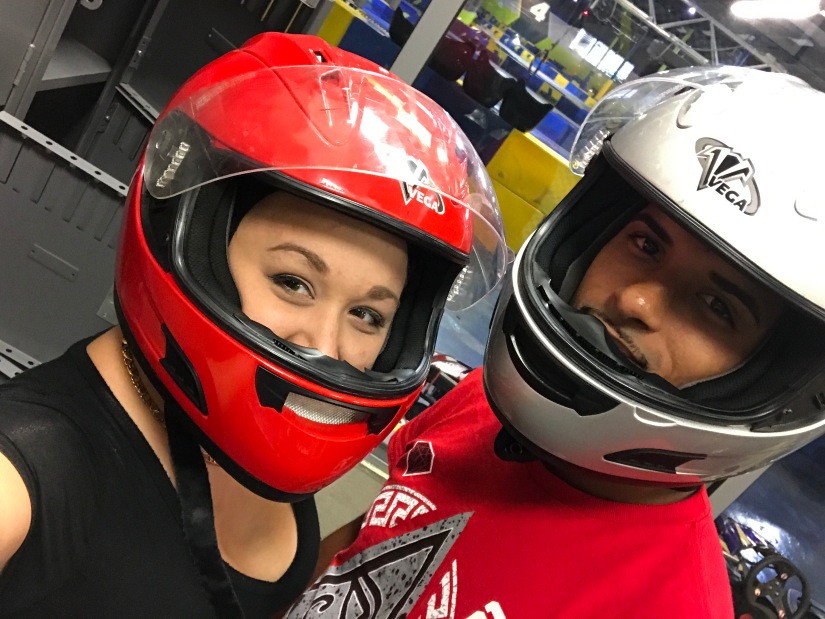 We exited back to the racers only “locker room” with helmets off unaware that we were about to get back in for our second race, new racers with us including another female! This may have made me very happy that I wouldn’t be the only woman driver during the race; but now that I knew what I was doing a bit more I was able to see my surroundings and knew where the harder corners were to drift around. The second race gave opportunity to see the television screen above us as we came around the first corner. It showed who was leading the race and then were was me fighting for third… I felt like I was doing so well, the mother in me worried about running into other racers kept coming out here and there. But after eight minutes of what seemed like a “faster” speed race we finished. I came in fifth while Geraldo came in third… I lost the fight for third haha but out of I believe it was twelve racers I’ll take fifth place.

After that excitement I was ready for a drink and with a full bar how could I say no to a rum and coke and finally our loaded fries that we had to run from before. Sitting at the bar we watched the televisions ahead, informing us of what racers were up next as well as the racers that were currently on the track. I found this to be really neat not only were there windows behind us open to the whole track to cheer on the racers but also such friendly staff telling us a bit more about I-Drive Nascar. Our young bartender answered any questions I had such as the youngest driver she has seen on the track, eight she believes, to how fast the go-carts go (40mph). Reading over the brochure before heading our way to play some air hokey I found out the go-carts are manufactured in France and our ergonomic, non polluting. The track alone had twelve turns, three hairpins, the senna S and a chicane… Let me be honest I have no idea what any of that meant other than it was a challenging course for myself and Geraldo. 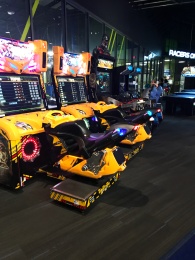 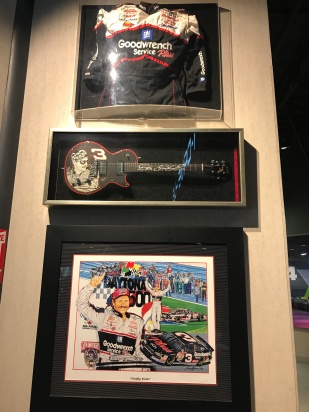 I haven’t had such a great time in such a long time and am patiently awaiting until we can return. For my readers I-Drive Nascar as provided me with some tickets. I will be doing a give away for two free 1 time race tickets as well as four 50% race tickets. There will be three winners, good luck to all.

(Check out the rafflecopter link below and enter for your chance to win!) 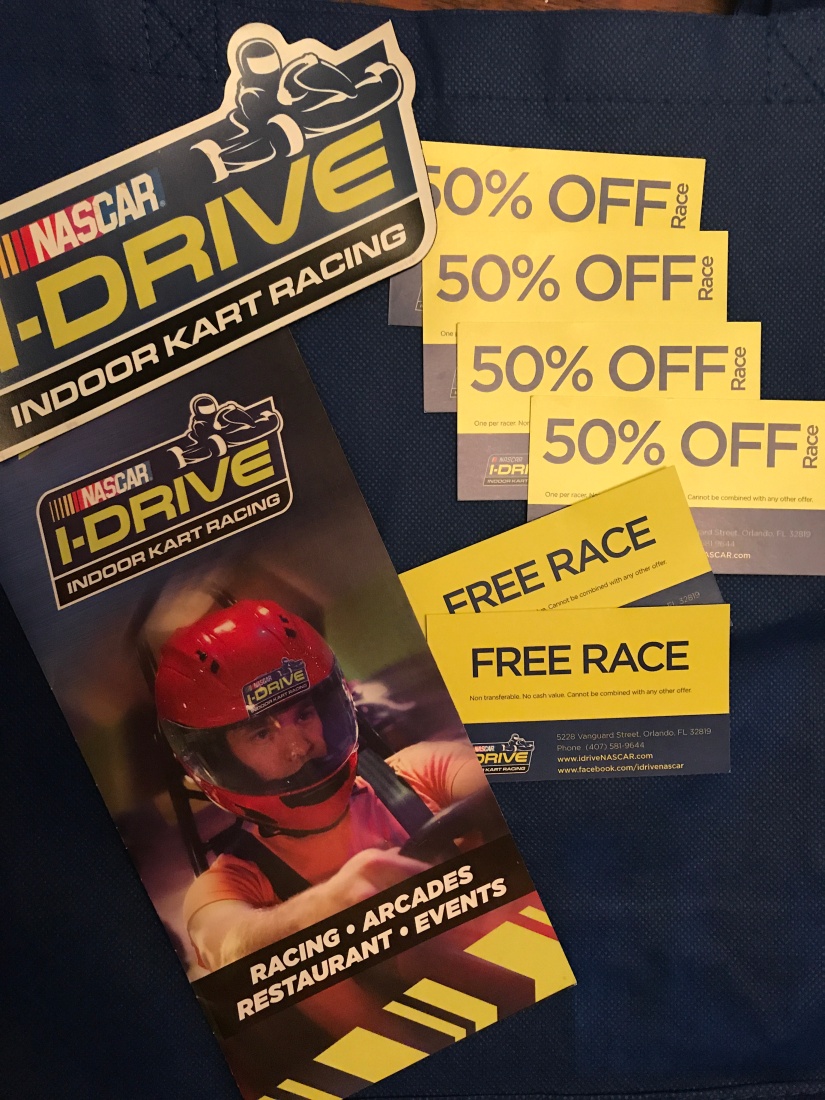