Balance is defined by Google search as an even distribution of weight enabling someone or something to remain upright and steady; a condition in which different elements are equal or in the correct proportions.

Where is the balance these days? We find a lot more children are glued to televisions, tablets, phones and other electronics and spending less time outdoors. As a child I grew up in a very small town; my neighbors were like family. I would mention their names but I sadly haven’t spoke to them in years and don’t want to upset anyone. My neighbors next-door to me were slightly older then me, more my brothers age but we all hung out together. Though now that I think about it I’m sure the older sister was probably forced to deal with me ha-ha. The brother was like my brother; he was goofy to say the least. Then up the road was my best-friend until middle school when she moved out of state. That was devastating to me at a young age; maybe it was the fact she was the only other girl in the neighborhood or the fact that we grew up with each other since birth. Down the road from her was another boy, he was “the skater boy” and looked out for me like a big brother. There were a few other kids in the neighborhood but we weren’t close to say the least.

Early mornings we never knew what we would be doing, whether swimming in one of the two neighbors pools, kickball, rollerblading or going through the woods down a long trail to the lake to fish. We grew up spending ALL DAY outside until the whistle of our parents or the “street lights” came on… Lets be honest though we didn’t have street lights living in the country, we had the neighbors light near their driveway that came on at a certain time. Yes we were lucky enough to have Gameboys, Gamecubes and N64’s, PlayStation and whatever else we used to play back then; but the outdoors called us more. Catching lightening bugs, frogs and playing catch; its a childhood I wish my children could have as well. 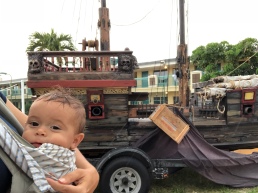 Now fast-forward to today… I am arguing with my girls about how much time they are spending playing PlayStation 4? I think that’s what it is. I’m arguing with them about watching their tablets and playing a video game at the same time. Arguing about a tablet or television being on during meals. What happened to talking about our days, family time? I grew up with no televisions on while we ate and sitting at a table all together. Do any families still do this? Or are the work, sports, and school schedules or just daily lives getting in the way of this?

It’s the summer of 2019… A list of plans I imagined in my head have already blown up. Now I need a new list? Things “we” did as kids. I want my children to have more memories about the places we’ve gone, the things we’ve seen and the experiments we did. I remember making rockets and setting them off in the college soccer fields or running with kites. Late night biking around the neighborhood or that one crazy time I decided to go with a friend on roller blades down St. Rt. 104… And lets say the hill going down was fun… Especially trying to stop and the trip going up was the hardest work out I had ever done!.. (At that age ha-ha).

We’re traveled to two different beaches since May, we’ve seen dolphins, manatees, searched for crabs and picked up what we thought were abandoned shells. We’ve been to the Orlando Science Center for a quick trip and Cocoa Beach Pirate festival. We’re missed multiple farmers markets due to weather and timing; that’s still on our summer to do list. But what else can I do with the children? Places, experiments, crafts from when “we” were children.

Maybe summers won’t ever be the same, it could be the technology that has been introduced to us… It could be the economy and how much parents are working just to get by. Or maybe we’re expecting our children to act older then they are? I know I have many flaws and at times when my anger happens; I need to remember why am I expecting so much out of my children? Let’s allow them to be children, make memories and remember they are only this young; we’re only this young for a short period of time.